Today, 11. April 2016, marked the official launch of Constituency Week, a pilot project that aims to bring the elected closer to those who voted for them. It provides a platform to hear citizen’s concerns, to witness the development of projects, to get the feeling of entrepreneurial and commercial activities and to create and promote a two-sided understanding between leaders and their people.

Constituency Week is funded by the European Union (EU) and administered and implemented by the Namibia Institute for Democracy (NID).

“Constituency Week – Working together for our Community” does consist of numerous different activities in all 14 Namibian regions and 42 different constituencies. Each day of the programme does emphasis a different main topic:

11. April: The official National Launch in the Khomas Region by Hon. Margaret Mensah-Williams, Chairperson of the National Council & H.E. Mrs. Jana Hybaskova, Head of the Delegation of the European Union in Namibia. Simultaneous Launches did take place in all 14 regions

12. April: Town Hall/Village Hall meetings: Councillors will use this platform to discuss three pertinent bills and other issues that are prevailing in their community

13. April: Community Enterprise Exhibition: SMEs and Income Generating Projects will have the opportunity to showcase their goods and services they offer to the community

14.April: Development Project Visits: Councillors together with CDC
members will be able to familiarize themselves with the progress of selected infrastructural development projects in the constituencies

15. April: Open Door Day: All Councillors will be available to their entire community at the Constituency Office for consultation without appointments

The objective of the partnership is to increase informed interaction between elected leaders and government institutions on the local and regional levels, civil society groups and the public on issues regarding public policy and rural development, in order to ensure poverty reduction through meaningful “bottom-up” decentralisation.

The NID and NIPAM will act as partners to offer training to Regional Councils, Local Authorities and Development Committees with the support and assistance of the Ministry of Urban and Rural Development (MURD).

One of the capacity development  programmes to be offered under this agreement is the training of Councillors in Local Economic Development and NIPAM in the next few weeks.

From February to October 2016, the Namibia Institute for Democracy in cooperation with Hanns Seidel Foundation will implement a Political Party Capacity Building Programme that addresses members of all Namibian Political Parties. The aim of the programme is to enhance leadership abilities through developing the knowledge, attitudes, skills and behavior of individuals. Thus, the participants will be enabled to ensure the optimal development of the organisational needs of their political parties and to guide them on their way forward.

Requirements for participants are:

Interested individuals should send their CV and motivational letter to Annacky Johannes email: . Deadline is the 15th of February 2016.

Find more information and a detailed outline of the program by klicking on the picture below.

The Namibia Institute for Democracy (NID) aims to increase public participation in Namibia’s democratic institutions in order to deepen the institutionalisation of democracy. The NID’s voter education campaign was launched under the theme “I-Vote Namibia”. The campaign is a reminder to the people of Namibia that voting is conducted in the interest of sustaining Namibia’s democracy.

Spot the Difference is a component of the “I-Vote Namibia” campaign - a publication that provides an overview of the different political parties in Namibia. Spot the Difference poses 50 questions to the political parties. The questions cover various sectors ranging from national governance, regional and local governance, socio-economic development, education, health, youth, gender, environment and human rights.

'Spot the difference' can be downloaded for free here. 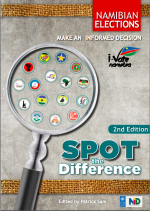 On the 10th of November 2015, NID participated in a public dialogue on the topic of “Promoting Integrity and Accountability through the Application of the Integrity Management Toolbox”. The event was organised by the Desert Research Foundation (DRFF) in collaboration with the Anti-Corruption Commission Namibia (ACC) and funded by the Embassy of Finland. Participants were members of the civil society, stakeholders, international donors and the media.

The Integrity Management Toolbox provides a systematic bottom-up approach to increase levels of integrity and fight corruption. The toolbox has already been introduced in certain Local Authorities and Regional Councils in Namibia. In this context, Naita Hishoono, Executive Director of NID, also introduced the EU-funded project “Strengthening the interaction between Civil Society and Regional and Local Authorities through Development Committees”. She explained the functions and importance of Development Committees as the link between the people and the government. She also implied how the Integrity Management Toolbox could be employed for the Development Committees in order to strengthen their function as the “watchdog” over local authorities.

Other speakers were Bernadette Shalumbu of the DRFN, Christine Liswaniso of the ACC, Martin P. Edward of the Oshikuku Town Council and Anne Saloranta of the Embassy of Finland. The event was moderated by Ricardo |Goagoseb of NBC.

In the context of the EU-funded project „Strengthening the interaction between Civil Society and Regional and Local Authorities in Namibia“, NID organised a meeting between Her Excellency Mrs. Jana Hybaskova (Ambassador-designate of the European Union to the Republic of Namibia), EU Programme Manager Lucia Lacalle and the Regional & Local Authorities and Development Committees in Opuwo, Kunene Region, in October 2015.

Development Committees are the link between civil society and sub-levels of government. They play an important role in helping citizens to communicate their needs and issues. Members of Development Committees in Opuwo thus used the chance to address some urgent problems, i.e. drought relief, lack of water, the need for an abattoir in Opuwo in order to create job opportunities and water management for rural areas.

The project “Strengthening the interaction between Civil Society and Regional and Local Authorities in Namibia” started in 2014 and is being implemented by NID in cooperation with the Namibia Institute for Administration (NIPAM) and the Ministry of Urban and Rural Development (MURD).

On the 25. of June, more than 100 guests from government, civil society, state-owned enterprises, private entities, youth and the general public came together to celebrate the first anniversary of the House of Democracy in Windheok.

The House of Democracy opened its doors in 2014; ever since then, it provides a home for different Non-Governmental Organisations in Namibia. Currently, it houses four partners of the Hanns Seidel Foundation (HSF): The Namibia Institute for Democracy (NID), the Institute for Public Policy Research (IPPR), the Insight Namibia Magazine and the Economic Association of Namibia (EAN), whose staff also participated in the celebration.

Naita Hishoono, Director of NID, welcomed the guests with a speech and encouraged them to network with the House Partners at the House of Democracy. Presenter for the evening was Nangula Shejavali from IPPR, who moderated throughout the event.

The reason for NID Executive Director Naita Hishoonos visit to France is to get a better view on democracy, civic education as well as NGOs and Governance. The place where the pictures were taken at was the Ministry of Foreign Affairs (MAEDI), Centre d'Analyse, de prevision et de Strategie (CAPS0) and the Ministry of Youth and Sports. 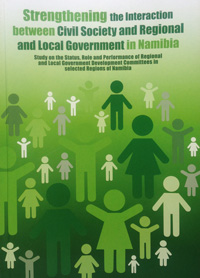 The establishment of Development Committees at settlement, local authority and regional level, was initiated by the then Ministry of Regional and Local Government and Housing in the late nineties with the aim of strengthening the involvement of the citizenry in the governance of the country at sub-national level. Development Committees are meant to consult the policy makers at all levels of governance on all development issues.

The IVLP's Women's group have visited the State Senate of Georgia this morning. The members of our group met up with State Senator James, the first black female Senator in an US-state. President Obama will be in Atlanta tomorrow. Unfortunately we wont be able to meet him. However we will feel his impact since the town will basically be shut down.

On the 8th of March 2015, Naita Hishoono from the NID, took part in the 50th commemoration of the Voting Rights March in Selma, Alabama, USA. The march signified an important chapter in the US-Civil Rights movement. Currently the movie Selma is showing on movie screens world wide (also in Namibia) depicting this crucial process in the US-history. The aim was for black US-citizen's to vote their representative and to be able to elect and influence the composition of the Judiciary in the US. Selma also reminds us of the Anti-Apartheid struggle in Namibia & South Africa and the continuous struggle for the implementation of Human Rights.

Please watch the movie Selma to understand the significance of this day.

The NID Executive Director Naita Hishoono is currently on a three week International Womens Leadership Program (IVLP) in the USA. Together with eleven other African women Ms. Hishoono recived an invitation by the US-State Department to be empowered as a Woman as Political Leaders. The mission will take her from Washington DC, to Atlanta/ Georgia, Santa Fe/New Mexico, Concord/ New Hampshire and back to Washington DC. 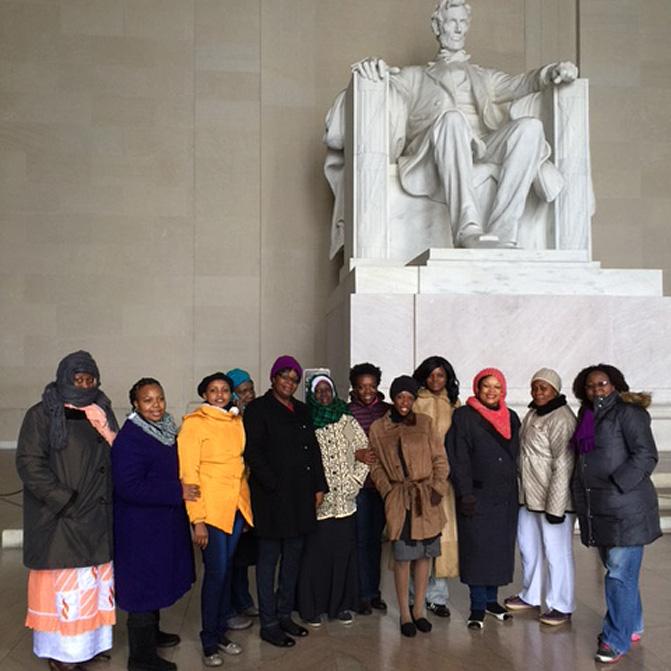